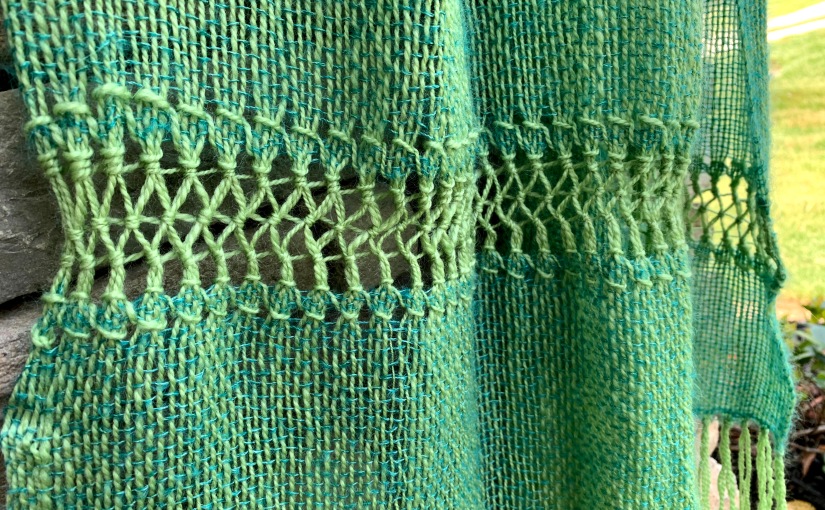 This is apparently a year of completing abandoned projects. I finished both my Red tunic and purple tunic (I guess I was going through a tunic phase when I started these a few years ago), and now I have another finished object that has been saved from the obscurity of the UFO pile. Early last September I warped my loom with some handspun and started weaving with a ball of Kidsilk Haze from my stash.

I started with plain weave, then worked 3 rows of Brooks Bouquet lace about 6 inches from each end. The rest of the scarf is plain weave.

Initially the ends were finished with overhand knots, as I didn’t have a fringe twister and didn’t want to twist all those ends by hand.

I recently got a fringe twister from Fiber Artist’s Supply, so the ends have finally been twisted into a neat and tidy fringe.

Overall I’m pleased with how this experiment turned out. It’s light as air, and the lace is very pleasing. I am a bit worried about the prickle factor, but I find that fabrics seems less prickly when I am cold, so I am hoping this will not be a problem.

Step 2: Knit valiantly until the project sucks your soul away

Step 3: Abandon the scarf for 3 years

Step 5: Decide to finish the scarf

Step 6: Decide you are too lazy to actually finish knitting a whole scarf (besides, you never liked that yarn anyway)

Step 7: Decide to make a cowl instead of a scarf

Step 8: Pretend you meant to make a cowl all along

Step 9: Give away excess yarn

Step 10: Marvel at your ingenuity while enjoying your new cowl (or, you know, giving it away for Christmas)

Do you remember the “Song that Never Ends”? I used to sing it all the time when I was a kid just to annoy people. (Yes, I was one of those kids. I am truly sorry. But I am now reaping what I have sown because people annoy me all the time by doing and saying stupid things. At least you can count on Karma.) For those of you who are not familiar with this song, here are the lyrics as I sang them in my childhood (for those of you who know them, feel free to skip down the page):

Some people started singing it not knowing what it was,

And now they’ll keep on singing it forever just because

Because of the way the words and music are arranged you can literally sing it forever. I just finished knitting a scarf like that. I have officially named it the “Scarf that Never Ends.” You see, this scarf needed to be at least 8 inches (20 cm) wide, and 5 feet (1.5 m) long. I was asked to make it by a coworker, who wanted a hat and scarf in grey for her daughter. She wanted them to be like this hat that I knit a few months ago. In multiple shades of grey. Which means that I ended up knitting the thing in 2 colours of grey in Brioche. You heard me right, this scarf is double thick. And really wide. And long. I began to sing to myself as I knit:

One day I started knitting it not knowing what it was,

And now I’ll keep on knitting it forever just because

It might have gone a little crazy. But at long last the scarf was done. I almost wept when I realized I still had the hat to make. Still, I knit on. And finally both hat and scarf were done. I wove the ends in, seamed very cleverly, and on Monday morning they were done. Hallelujah! 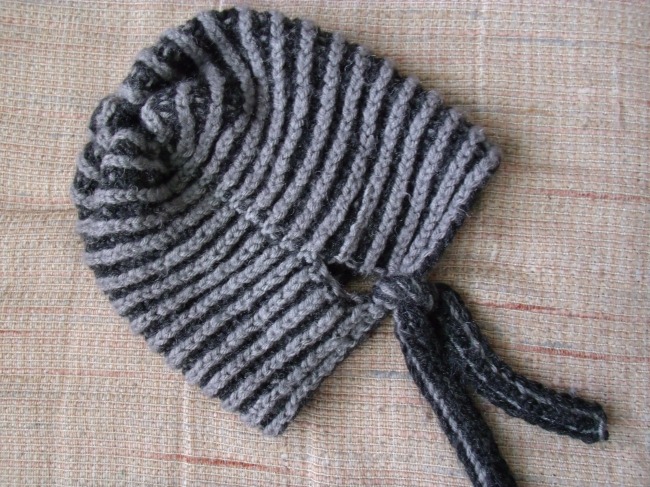 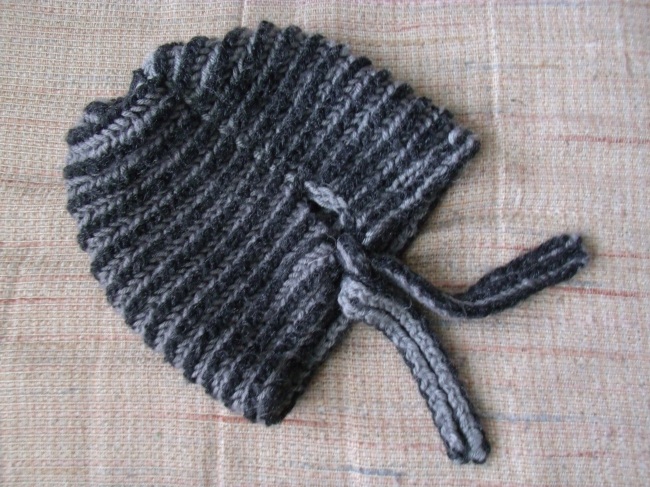 Pattern: Loosely based off of the Brioche Hood Hat

I must say: as crazy as this project drove me, it was amazing to give it to my coworker and see her love it immediately: “This is beautiful! My daughter will love it.”