Last October I bought some fiber for my birthday. This is “Lake Huron” on Targhee by Deep Dyed Yarns.

A few days later I bought some hand cards at SAFF.

What’s a girl to do when she has new fiber AND new hand cards? Why card it up, that’s what! 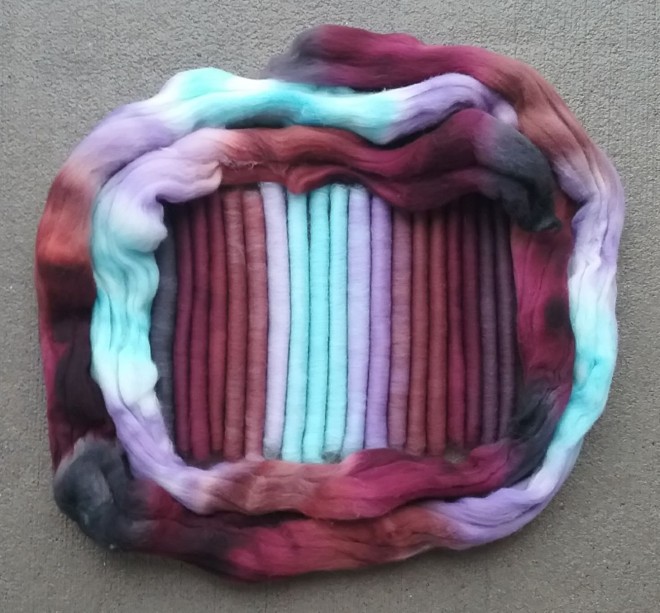 I had originally planned to keep the rolags in the original colour order that they came in, but then I thought of arranging them in a massive gradient, and I couldn’t get the idea out of my head.

Since I now had a box full of beautiful rolags, I had to spin long-draw. Long-draw is a skill I am still learning, so this took me quite a while.

Once I had finished spinning the singles, I began chain-plying the yarn to preserve the colour order I had so carefully established. My singles broke several times, so finally I ran them back through the wheel to add more twist before finishing the plying. Lesson learned: Make sure your yarn has enough twist before beginning to ply, especially for a chain-plied yarn since there isn’t another singles to provide additional structure! 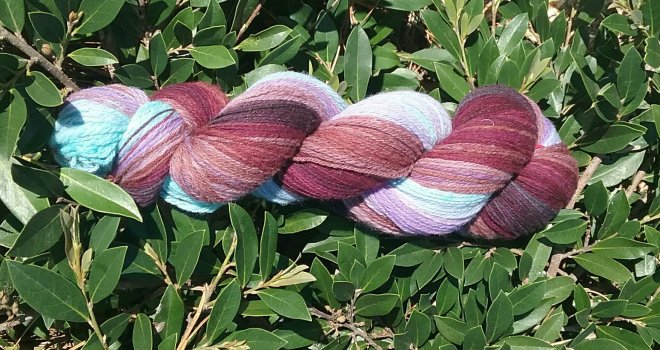 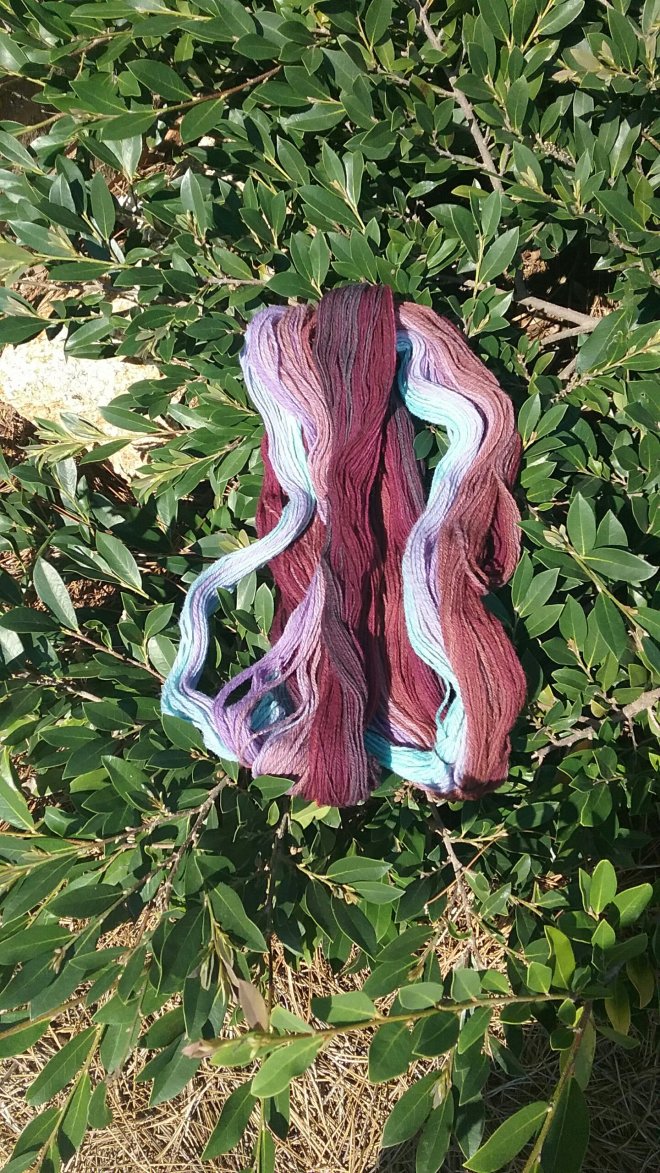 I don’t have any definite plans for this skein yet, but it would make a lovely shawl or cowl – something that will use up all the yarn and that doesn’t come in pairs of items. I think it would make a beautiful woven scarf. Conversely, it would be gorgeous as a Lost in Time shawl. 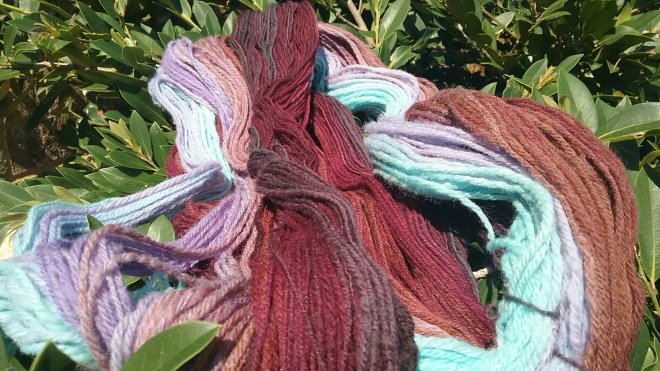 This year I am challenging myself to try new spinning techniques. I learned to spin almost 2 years ago, and until this year almost all of my spinning has been using short forward draw and commercially prepared top to make a Worsted style yarn. When I bought 12 oz of Southdown wool a few weeks ago, I decided the time had come: I would perfect my long draw and learn to make my own rolags.

To make a rolag, you start by pulling off a handful or so of your fiber and placing an even layer over the tines of one of the cards so that 1/3 to 1/2 of the fiber length hangs off the end of the card. It doesn’t have to be pretty or aligned. We’ll work on that in the next step. 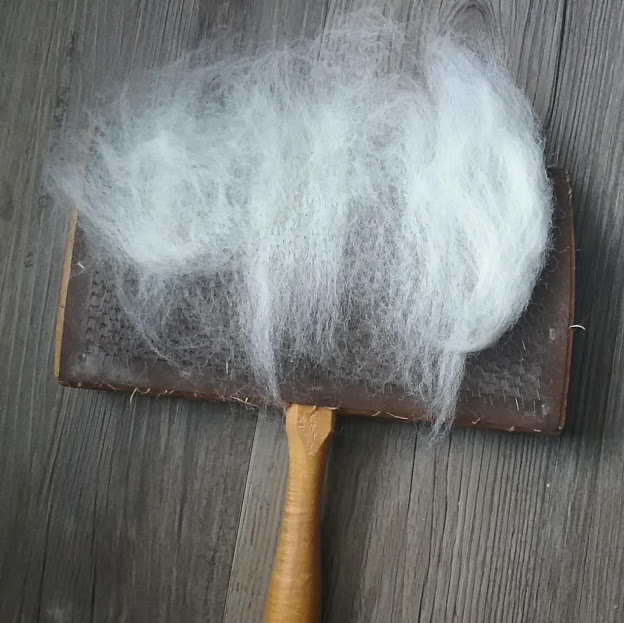 Your fiber won’t be perfectly aligned yet, but it will be more aligned than it was at first. Continue carding until your wool is as tidy as you want it to be. I used combed top for this project, and it took me about 3 passes to be satisfied.

Once you are happy with your fiber prep, it’s time to roll it all up into a rolag. You’ll start with all the wool on one card. Take a pair of straight knitting needles (any gauge or material will do) and slide one below the end of the fiber hanging off the edge of your card and the other over the wool to sandwich the fiber in between them. Roll the needles and wool toward you in a burrito until all the wool is off the card. Move the rolag back to the far edge of the card (with the needles still in the center) and roll toward you again to lock the fibers in place. Remove the knitting needles. Voila! You’ve made a rolag! 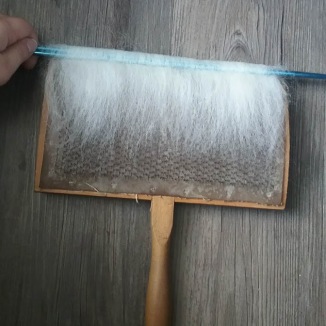 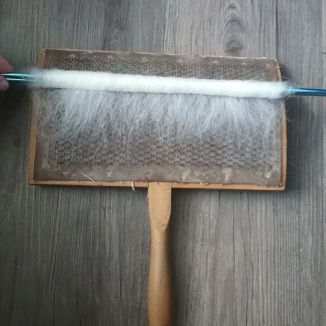 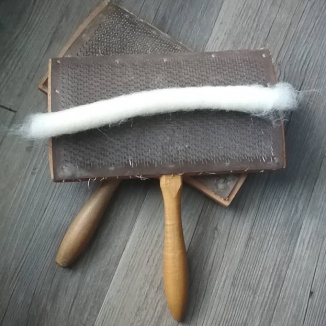 I have had so much fun making these rolags over the last few weeks. I hope you have a fantastic time, too! Warning: Making rolags may be addictive.

P.S. If you ever need a judge wig, rolags make a pretty good facsimile!

My spinning group is doing a breed study this year and June is my turn to present. I decided to highlight Southdown wool because I think it’s pretty fabulous. “Down” breeds come from the “downs” in England and consist of Southdown, Suffolk, Dorset Down, Hampshire, Oxford, and Shropshire. There are a host of other breeds that are considered “down-like,” but these 6 are the true downs. Southdown is the original down breed. The Suffolk, Dorset Down, Hampshire, Oxford, and Shropshire breeds were all created by breeding Southdown with other kinds of sheep to maximize different qualities.

What’s so great about Down wool? It’s springy with a diorganized crimp, the wool doesn’t have a lot of kemp (chalky, brittle fibers) or hair, and is resistant to felting (this is my favorite part). It’s also important to know that most Down breeds are raised for meat, so often their wool is inexpensive (I get mine here). Southdown wool has a micron count of 23-31 and a staple length between 1 1/2 – 4 inches. Because of the springy nature of the wool and the shorter fiber length, Southdown is best when carded and spun woolen. As with any wool, though, you can use it however you like.

I first spun commercially combed Southdown top as a new spinner over a year ago. I had a spindle and some wool and I wanted to learn everything, so away I went, spinning the wool Worsted (short forward draw). I loved how this yarn came out. The wool was so easy to spin with – just enough drag to draft nicely, but not enough to make me really work for it.

Later, I spun more of this same top when as a learning exercise (I wanted to be able to spin thick singles). The yarn ended up delightfully thick and thin. 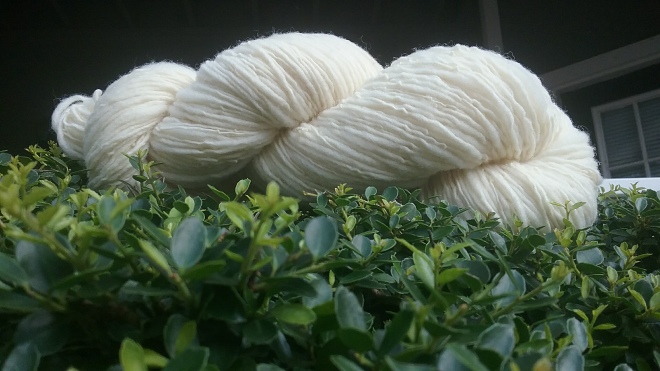 I was curious about how resistant this wool is to felting, so I knit up a few swatches to do some very scientific research.

The first swatch was my control: I washed it with wool wash in hot water, squeezed out as much water as I could, and laid it flat to dry.

For the second swatch I let it soak in hot water for a few minutes, then shocked it with cold water. I continued shocking the swatch back and forth between hot and cold water several times and rubbed the swatch to maximize any felting that would take place. Other than a little fuzziness, this swatch looks almost exactly like the first swatch. 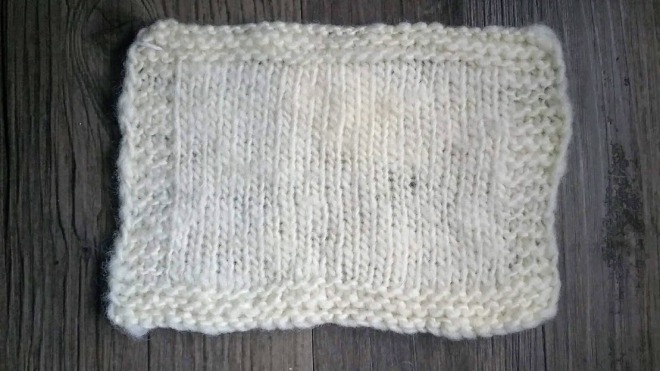 With my third swatch I decided to go all out. I washed and dried it with the rest of my laundry. After going through the wash, the swatch looked exactly like my second swatch: a little fuzzy, but still in great shape. It shrunk lengthwise and widened width-wise a little in the dryer. This was the most dramatic change of the 3 swatches, but I still wouldn’t say the wool felted.

I’m wearing a swatch under my shirt as I type this, and it is a tiny bit itchy. If you have sensitive skin I wouldn’t recommend Southdown as a base layer, but it would make an excellent and hard-wearing sweater or jacket. Conversely, because of the springiness of the wool, Southdown would make great socks!

Now that I’ve done a little more study on the breed, I’m taking commercially prepared top and carding it into rolags to see the difference it makes in the yarn.

Look at that loft! I can’t wait to knit this up!

Up until now I have exclusively spun combed top. Commercially prepped Top is easy to find, both dyed and undyed, and it’s easy to spin. And the method of spinning worsted (this has nothing to do with the diameter of the yarn, but rather with how you draft the fibers) gives the spinner a lot of control over how the yarn spins up. I love spinning Top, but I am a curious cat, and I wanted to try spinning woolen, and that meant getting some rolags and some batts and learning a different drafting method.

I bought 4 oz of these glorious rolags from Wildthyme Art on Etsy.

You can see how each end is a deep black that fades through grey to a stark white in the middle. The rolags have sparkly bits and some fun colourful additions throughout. I love the stark contrast of the black, white, but buying sparkles was a bit of a stretch for me.

The first rolag was so hard to spin. Not by any fault of the rolag, but because I was learning to use the short forward draw instead of my normal short backward draw. By the time I got to the second rolag, though, things were going well. I took this spin with me to a St. Distaff’s day celebration at my LYS, and spun almost half of my fiber in one day! Clearly, woolen spinning is speedy! 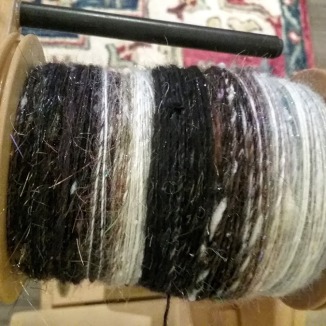 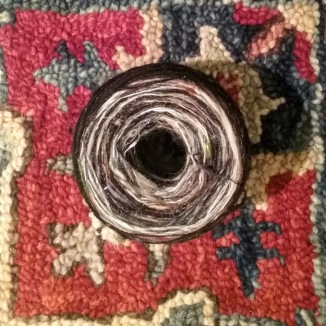 As I finished spinning my singles I thought long and hard about how I wanted to ply this yarn. I decided on a 2-ply, but I didn’t want stark black and white stripes in whatever I would make out of this yarn. After much thought, I decided to ply a marled yarn, where the black and white were plied together. I pulled the first few yards off the ball and held them in my left hand in a butterfly, then once I got into the grey section, I began plying the yarn on itself.

When the short end that I had held in a butterfly was plied, I added the other end of my ball to continue plying the singles on itself.

I finished plying, looked at my yarn, and thought, “You know, I would like this yarn a whole lot better if it had a lot more twist in the ply. So I ran it through my wheel again to add more twist. I am SO HAPPY I did this! I love how my yarn turned out!

So now I get to decide what do do with it. Weaving? Knitting? I think it could make the most wonderful handbag!

What do you think? What would you use this yarn for?

P.S. The coupon code for my newest pattern is still running. Get the Ribless Hat on  Ravelry for 18% off until January 18 with the code HOORAY18